Mid-century modern remains one of the most lasting design styles to this day. From architecture to interiors to furniture, MCM is at the pinnacle of design. It is an inspiration for the several generations of designers that have come since. And it’s not going anywhere anytime soon. So if you’re in the market for some iconic mid-century modern furniture, you can be sure that it’s an investment that will last.

These furniture pieces made a name for themselves in the mid 1900s (hence mid-century) but still show up in homes now. Both everyday “normal people” homes as well as iconic show homes. When it comes to furniture design, this handful of pieces is what really solidified MCM’s place in history. Although this list is not exhaustive by any means, if you’re trying to learn more about what makes the mid-century modern style so great, this is the perfect place to start.

For each iconic mid-century modern furniture piece that I cover, I’ll give you the date it was created, some background on the designer, and any other interesting facts on the conception and creation of the piece.

And – perhaps the best part – I’m going to give you some more affordable options to get the look in your own home! The authentic iconic pieces can run you thousands of dollars, but there are plenty of dupes out there that can fit your budget. Some are near-replicas, and others are simply a similar look.

Here are the most iconic mid-century modern furniture pieces

The Ball chair is one of the most recognizable funky space age chairs around. It looks like it’s made for a home like the one in The Jetsons.

This iconic mid century modern chair debuted at the Cologne Furniture Fair in 1966 and helped to make a name for it’s designer, Euro Aarnio. This Finnish designer became known for his innovative furniture design using plastics and fiberglass.

The Ball chair remains one of the most popular mid-century modern furniture pieces and can be found in museums, movie and music video sets, and iconic homes around the globe.

You can find great reproductions starting at around $1,000, but for an authentic original, expect to drop at least $7,500.

For a truly affordable dupe, you may not be able to find quite a dead ringer, but I’ve included some similar options below.

Designed by Charles and Ray Eames for Herman Miller, 1956

You’ve probably seen this famous chair before if you’re interested in the mid-century modern aesthetic. But did you know that it was created by a husband/wife duo?

The pair were big on iteration, ensuring that every piece had a “way-it-should-be-ness.” This process included constant iterations before releasing it to the public, and even after, making modifications based on feedback.

That quest for perfection is what helped this chair last in the cultural zeitgeist for decades. It’s not too flashy, and the beauty is in its subtlety and ease of design. As Ray Eames mentioned, “What works good is better than what looks good, because what works good lasts.” And lasted it has.

This is currently in production at Herman Miller starting at around $5,500.

The butterfly chair may also be called the Hardoy chair or the BKF chair – a reference to its creators.

A group of 3 Le Corbusier alums relocated to Buenos Aires, Argentina and they had the goal of bring the Urbanist ideas of Le Corbusier to Latin America. Once they launched their design group, Grupo Austral, they created this practical and simple, yet legendary, mid-century modern chair.

It really blew up once it was imported into the US for the MoMa and, most notably, for Frank Lloyd Wright’s Fallingwater. This is when the butterfly chair secured its spot on the list of the most iconic mid-century modern furniture.

Unfortunately, Knoll, the manufacturer of the chair, was unable to secure copyright protection. So original production was only 4 years long. That means that originals are extremely hard to come by, and they will cost you quite a bit.

But luckily, the dupes are plenty. In almost every college dorm room, you’re likely to see one. But whether you’re looking for a cheap option or a higher quality one, the options are plenty.

This coffee table is another piece that is often duplicated because of its iconic mid-century look. It’s a simple yet beautiful design, consisting of just an organic-shaped glass tabletop and two identical curved wooden pieces that compose the base.

The designer of the table, Isamu Noguchi, had a scupltural mindset when it came to furniture. He said, “Everything is sculpture. Any material, any idea without hindrance born into space, I consider sculpture.”

It looks delicate and beautiful, but is surprisingly functional and sturdy. The balance between sculptural beauty and practicality has made it last the test of time and earned its spot in homes since its creation.

Since this is currently still in production at Herman Miller, you can grab an authentic version for about $2,000.

This mid-century modern lamp was designed for a modernist restaurant in Copenhagen, so its reference to food makes a lot of sense. Since its introduction in 1958, it’s become a global design icon.

Its designer, Poul Henningsen from Denmark, was enamored with lighting and figuring out the ways to manipulate it beautifully. One thing he was passionate about was finding out the ways in which light can affect our wellbeing.

This light was one of the fruits of that passion. In his work, he tried to shield people from harsh, direct lighting. The Artichoke lamp skillfully diffuses light, giving a glare-free experience no matter which angle you look at it from.

What we’re left with is a beautifully designed light fixture that is more soothing to look at.

A true PH Artichoke lamp will run you upwards of $10,000. But there are several dupes on the market as well as similar but distinct alternatives.

Since Poul Henningsen was such a trailblazer in the mid-century modern lighting space, I couldn’t not include another iconic piece of his on this list.

He designed this piece for Louis Poulsen, a world-renowned Danish lighting manufacturer. And much like the Artichoke Lamp mentioned above, is known for its glare-preventing design.

It’s decidedly mid-century modern, yet timeless. (Which honestly can be said for much of the iconic mid-century modern furniture pieces). The design is beautiful and intriguing, but simple enough to be used repeatedly in commercial spaces like restaurants or stores.

An authentic fixture will cost about $1,200, but luckily this is a piece that more affordable manufacturers love to duplicate.

This is likely one of the most recognizable iconic mid-century modern furniture pieces. It’s a silhouette that never seems to fall out of favor.

In 1957, Eero Saarinen designed the Pedestal Collection to fight the “ugly, confusing, unrestful world” that existed on the underside of tables. It quickly was given the more approachable nickname of the Tulip table/chair.

With this collection, including both chairs and tables, he sought to take advantage of this previously ignored space to create a beautiful design moment. And since then, it reigns supreme as one of the very best space age silhouettes.

These pieces are still currently in production at Knoll and will run you about $1,900 for a chair and starting at $2,800 for a table. But you’ll have no problem finding dupes, since this a piece that is commonly replicated due to its popularity.

Arne Jacobsen was a world-famous Danish architect and furniture designer. He had a desire to really experiment with and modernize the upholstered armchair. Originally created to furnish the SAS Royal Copenhagen Hotel, this is one of his signature pieces that really helped to solidify his position as a legendary designer.

The Egg Chair was created as a response to the harsh geometric lines that came with the Modernism design aesthetic. Jacobsen wanted to create a softer, more comfortable chair to contrast with this.

Its foam support and fluid design, paired with the tilt/turn functionality, helps to make this the perfect chair for lounging and conversing alike.

An authentic original costs upwards of $1,300. Unfortunately, there aren’t too many spot-on dupes, but below you can find some comparable chairs.

Did you know that this iconic mid-century modern living room fixture was inspired by the frame of a bicycle?

Its designer, Marcel Breuer, was intrigued by the De Stijl movement’s constructivist theories and sought to reimagine the classic club chair by tearing it down to its elemental lines and planes.

He created this piece while still an apprentice at the Bauhaus, and in the process made history. The Wassily chair is believed to be the very first chair that utilized bent tubular steel. Since then, this technique has been adopted across the industry.

An original Wassily chair costs about $3,300.

You have probably seen this kind of chair before and maybe didn’t even realize that it was an iconic mid-century modern furniture piece.

Although the design in itself is simple – the designer said he “aspired to be good rather than interesting – the expert craftsmanship helped launch this chair into stardom.

With the assistance from modernist designer Lilly Reich, van der Rohe was nominated to design the Weimar Republic’s Pavilion at the Barcelona International Exposition of 1929.

The goal of this design was to create a chair fit for royalty. People say that the campaign chairs of ancient Rome were a source of inspiration. This combination of old world design with modernist ideas is what made these chairs so legendary.

The exact details of the chair changed slightly over time to make it a bit sleeker. In 1953, once the original patents expired, Knoll took over production. Because of the upgrades made, most people prefer to look for original from the 1950’s on. An authentic original will cost you about $3,300.

The Wishbone Chair, originally called “Y” or “CH-24,” was one of the pieces Hans Wegner designed in a series inspired by Ming Chairs seen in portraits of Danish merchants.

In addition to its gorgeous design that stands the test of time, what makes this chair so incredible is its craftsmanship. Each chair requires over 100 steps to manufacture, with many of those steps needing to be done by hand.

Another notable piece of the design is that the back and armrest are combined into a single piece – giving it stability and comfort. This “Y” shape is what gives the Wishbone chair its name.

Produced by Carl Hansen & Søn, Wegner created this chair as a supplement to the heavier, sturdier silhouettes that were common of the time.

Check out the Mid-Century Modern Essentials starter pack to get the scoop on everything you need to know about the MCM style. Learn about the background of the style, defining characteristics, popular designers of the time, and more!

Note: This post may contain affiliate links, so I may make a small commission if you make a purchase. But this does not increase the cost to you at all – it comes out of the seller’s pockets. 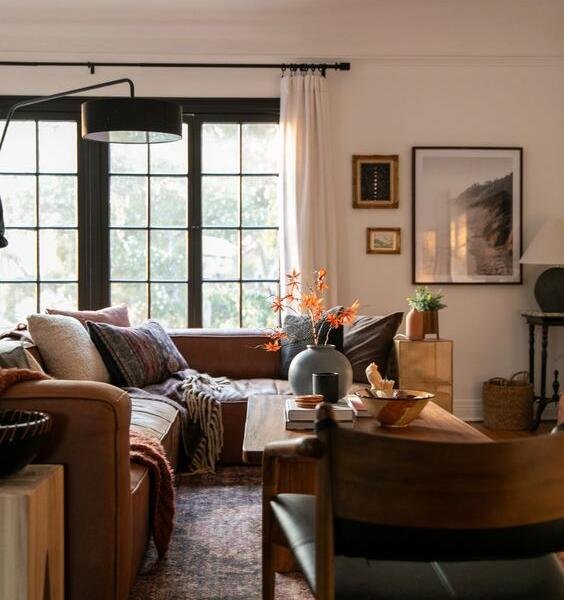 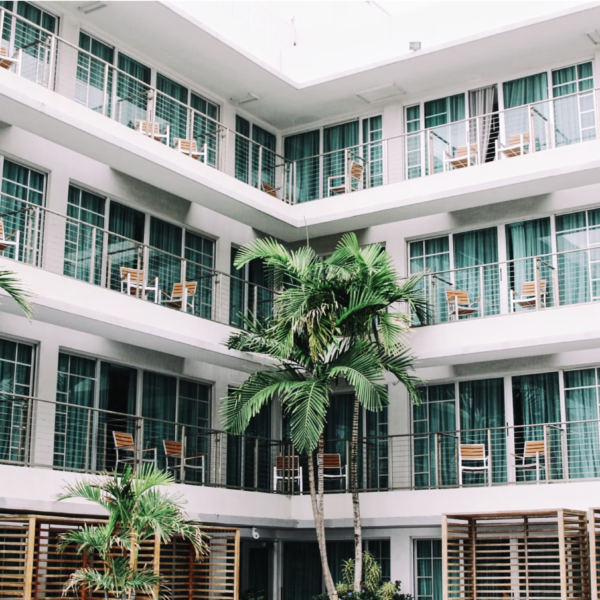 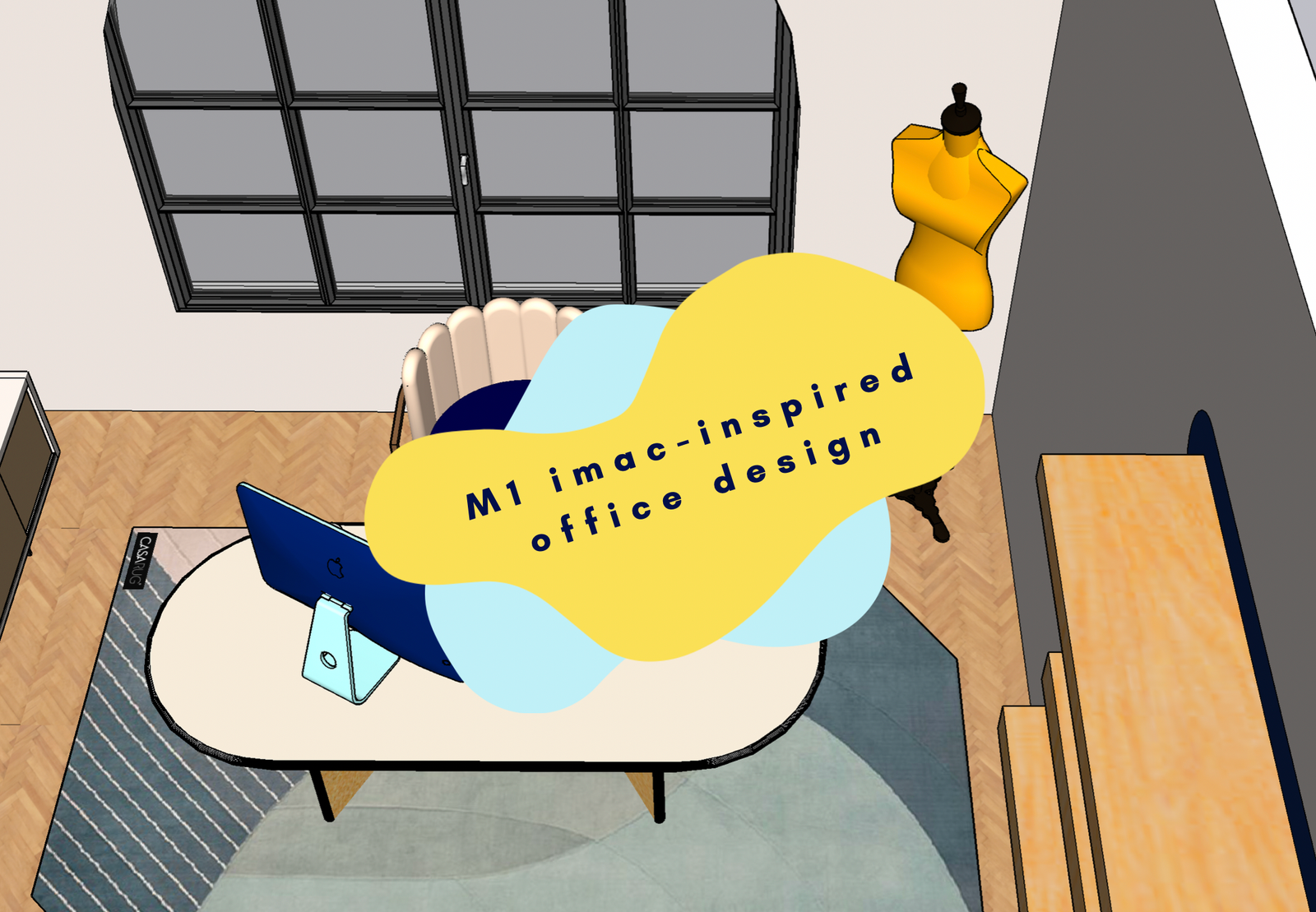 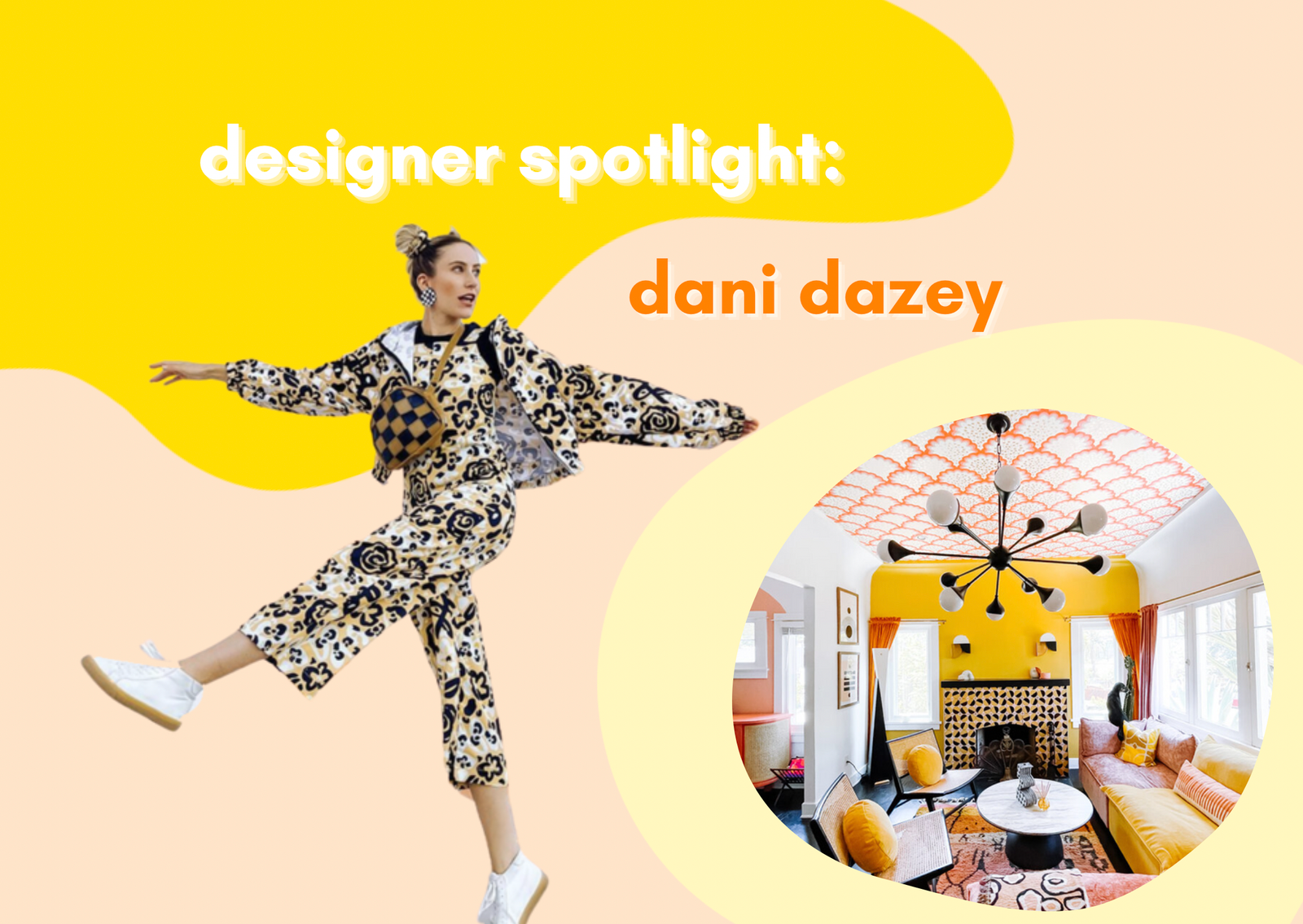 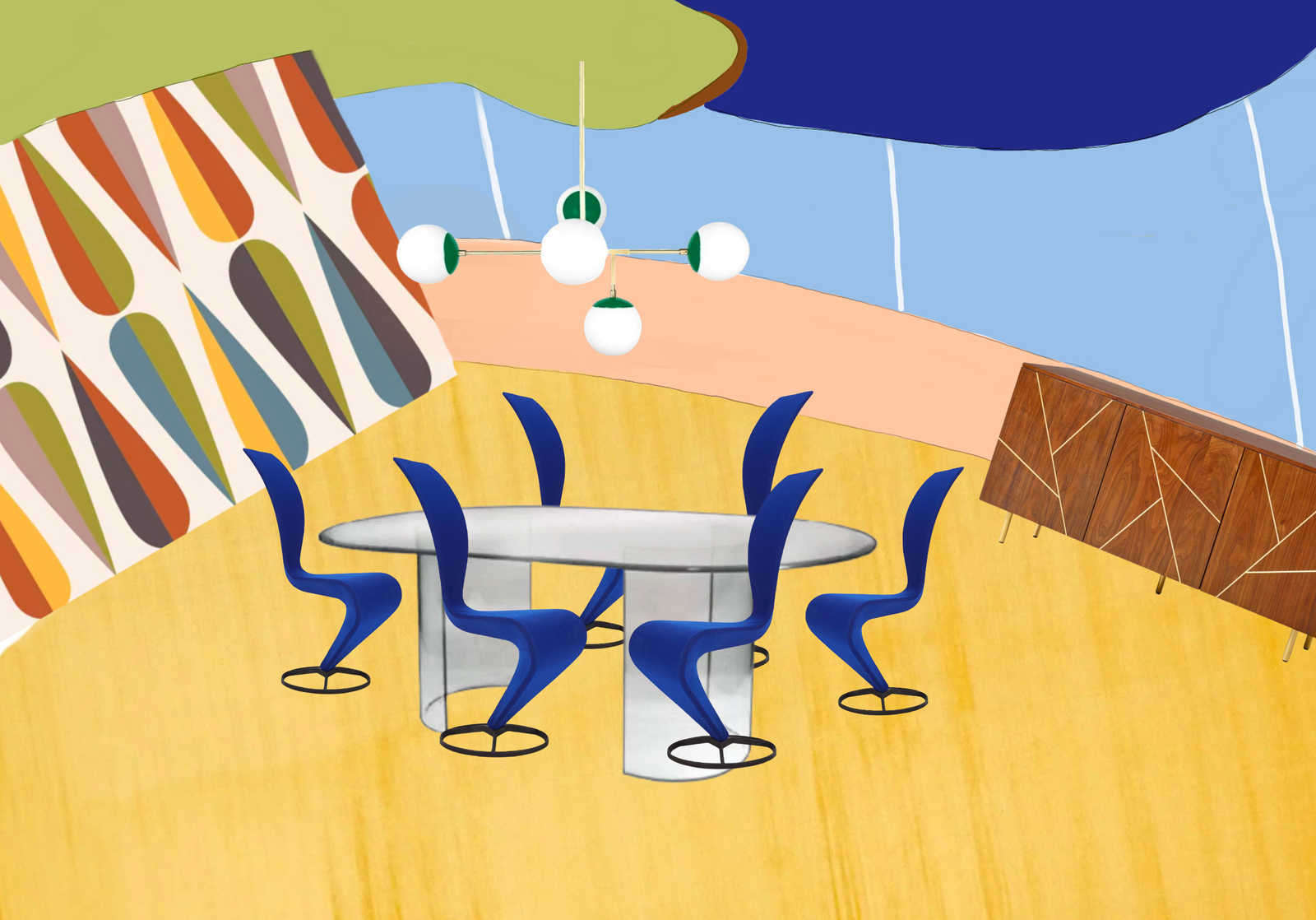 The Jetsons home brought to life